By chapelhillbaby in Baby, pregnancy on December 26, 2016
No comments

It is crazy to think that Christmas has already come and gone and we are another week closer to meeting our sweet babe. The holidays haven’t really felt like the holidays to us this year – we’re chalking it up to our minds being pre-occupied with baby thoughts. That being said, we had a wonderful time with both of our families – especially watching our niece and nephews open their presents and getting to see everyone one more time before little man arrives. I think if I had a beard and some reindeer, I could be confused for Santa with this bump! 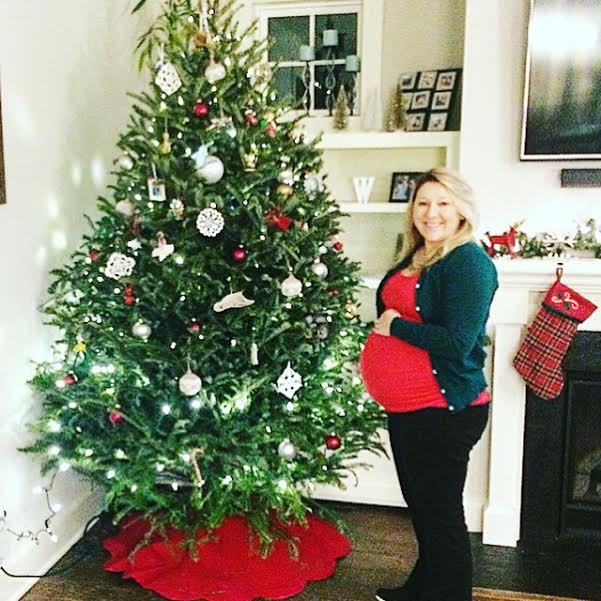 Baby size: 6 lbs and about 19 inches. I have another appointment on Wednesday, so we’ll see where they think he is and if we’re still trending on time (or hopefully a little ahead??)

Stretch marks/heart burn/acid reflux:  Feeling good this week and still no stretch marks. I do love the Burt’s Bees oil…. will have to share that with any friends who get pregnant in the future!

Sleep: I’ve taken less naps this week but have been sleeping later and later in the mornings. Didn’t wake up until almost 9 today! Trying to get it in while I can…

Maternity clothes: I think I’ve done my last ‘dressing up’ while pregnant, so from here on out it’s whatever is comfortable and doesn’t make me groan too much while putting it on.

Movement: Very active little boy who is running out of room. He kicks hard at night as we’re trying to fall asleep and usually around any meal time. Everyone wanted to feel him at Christmas, but I swear he hears me say “come feel him kick” and then he stops. You’re more likely to see my belly move than you are to feel it. He’s not a performer!

Best moment this week: Organizing our nursery. We both feel much better about things now that they seem ‘finished’ and ready for him to come home to.

Food Aversions: fish (other than salmon) and curry

Anything making you queasy or sick: cigarette smoke… I can’t stand it! Also, peppermint mocha lattes from Starbucks were making me nauseous so I had to stop drinking them (sad face!)

Missing anything: normal activities not being so hard! We’re still walking 2-3 miles a day with the boys and I’m trying to do some light exercises when I feel up to it but he hasn’t dropped yet so I’m still very out of breath with most small movements.

Symptoms:  swollen feet after our Christmas trip to Virginia (less than 24 hours) and now I officially have cankles. I don’t think they’ll be going back to normal until after we leave the hospital so I’ll just have to get used to that.

As we head into our last weeks of the pregnancy, We’ve been tying up loose ends…  started my disability claim for work and set up all of my leave, ordered my breast pump, installed the car seats and put everything away in the nursery and I have my hospital bag MOST of the way packed now.

Starting this week, I’ll see the doctor every week until baby arrives. We have another appointment with our Doula in early January to work through some more details, relaxation techniques and figure out different ways I want to labor at home before we head to the hospital. I really think we’re going to be glad we hired her!